Pioneers with a leap of faith 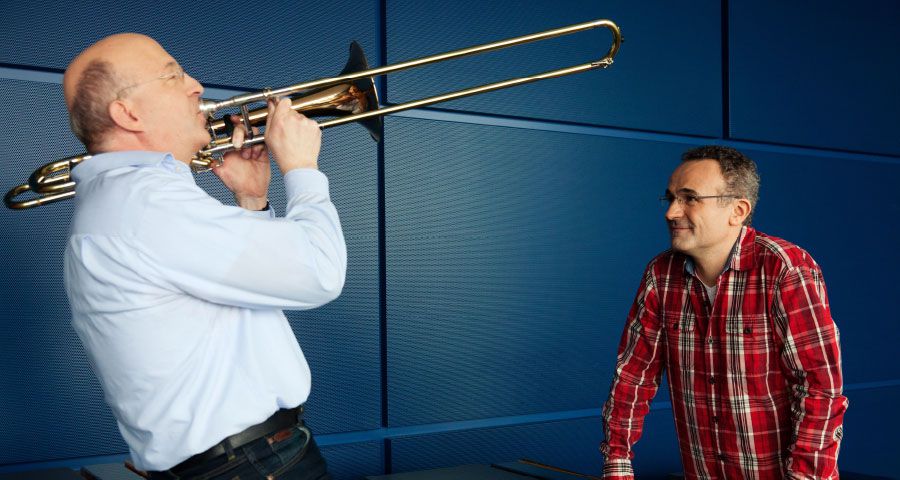 In 2002 Gira invented the door intercom system in the design line and by doing so revolutionised the world of building technology. André Dornseiff, senior hardware developer and Hartmut Heinbach, programmer for embedded software/ firmware are the "founding fathers": Both men are responsible for the development of a market segment which to date provides Gira with high growth rates and sales in the millions. Together with Frank Schimmelpfennig, head of Electronics Development at Gira, the two of them discussed the major challenges in the project, talked about ideas development in technical careers and the special moment when the created product emerges onto the public stage.

Gentlemen, what was the major challenge for the idea of the door intercom system in the design line?

FS: The pioneering work consisted in getting the hardware so small that it would fit in the classic flush-mounted device box. Miniaturisation to that extent was unknown at that time. The second point was the acoustics of the hands-free system. Experts told us: That can't be solved. You will not be able to place the microphone and speaker so close together without acoustic feedback.

HH: Eleven years ago components were not as small as we know them today from our mobile phones. We can say: Five years earlier it would have been definitely impossible to implement our idea.

AD: The CEO at that time simply said: "Work on door communication". Then we were able to work in peace for a long time. Management were of course very interested in the project, but they didn't keep asking us: "Mr Dornseiff, how's it going, when can we deliver?"“

This means, you were able to expend all your energy on the topic, although you didn't know at all whether something would come out of it? That's also a risk for Gira, isn't it?

FS: The risk was already very high, no-one knew whether it was really feasible.

AD: It was already highly likely that something would come out of it, but for a long time, we were not able to really gauge whether the hands-free aspect or the small construction would work.

Nevertheless, both of you put all your energy into this the whole time. Isn't that the dream job of every developer?

HH: We were driven by our own ambition right from the start. We really wanted to develop the best door communication system on the German market. And in the end we managed to do it. 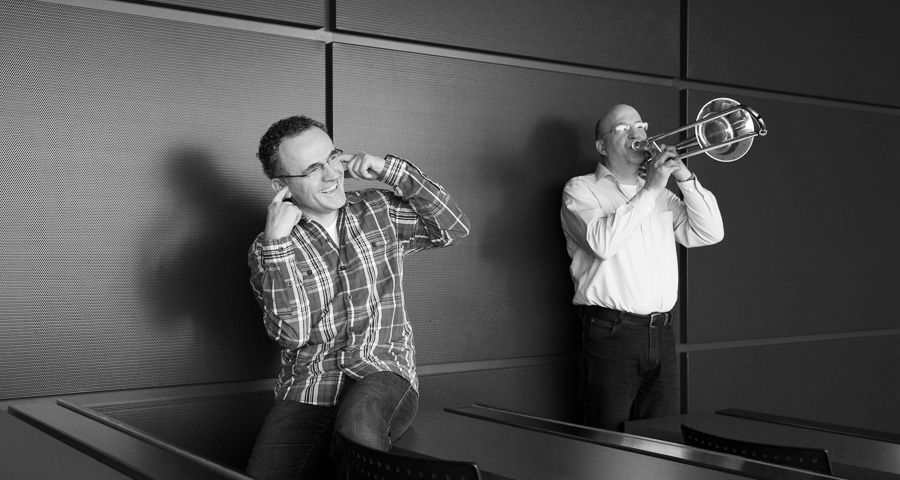 Only one person plays in the church's trombone choir on a voluntary basis – but both of them set the tone for the development of the "Gira door communication in the design line": Hartmut Heinbach [right] and André Dornseiff [left]. "We were driven by our own ambition right from the start."

What was your time schedule?

HH: We drew up a very ambitious schedule, which we also kept to. The system was developed in two and a quarter years, the aim was to present it at the Light + Building 2002. This was already an achievement when you consider the amount of device components requiring custom-developed software. You don't manage that five times in your life.

Because of the lack of sleep?

HH: We worked on it day and night, also at the weekend. On the other hand I also have fond memories of this time, because it's not everyday that you manage to pull off this kind of achievement in a team.

AD: I had a similar experience. Luckily, my family were very understanding when my thoughts were often on the project. That was an exceptional situation. What problems did you struggle with in particular? How did you

get to grips with the issue with the hands-free system, for example?

AD: Eventually we got to grips with the problem by creating an electronic voice-operated switch, although that wouldn't have worked at first, according to the application as per the data sheet. We also had problems with the illumination of the call buttons. Eventually, we opted for LED technology with light conductors, as is common today. Back then, however, this was not yet widespread for door intercom systems.

HH: The limited memory of the microcontroller, among other things, kept me occupied for quite a while. We only had two kilobytes of memory available for the implementation of the door communication firmware and this was simply not enough. One device was at 105%. And when you have optimised software for the fifth time already, it becomes increasingly difficult to find something else that can be optimised. In this case I sat down for a whole week looking for code that I could save.

How did it feel when the system was actually ready for the presentation at the trade fair?

AD: This was of course a fantastic appearance at the Light + Building 2002. When the customers arrived, at first there was a crowd of people at the presentation walls, it was jam-packed, you couldn't get through. People loved it, this was the impression from many conversations. Especially since we had directly demonstrated the video function.

This is certainly a quite emotional moment when you see your own baby on the market, isn't it?

AD: There is a certain euphoria.

HH: Yes, baby is the right word. It's like bringing up children and is associated with pain. 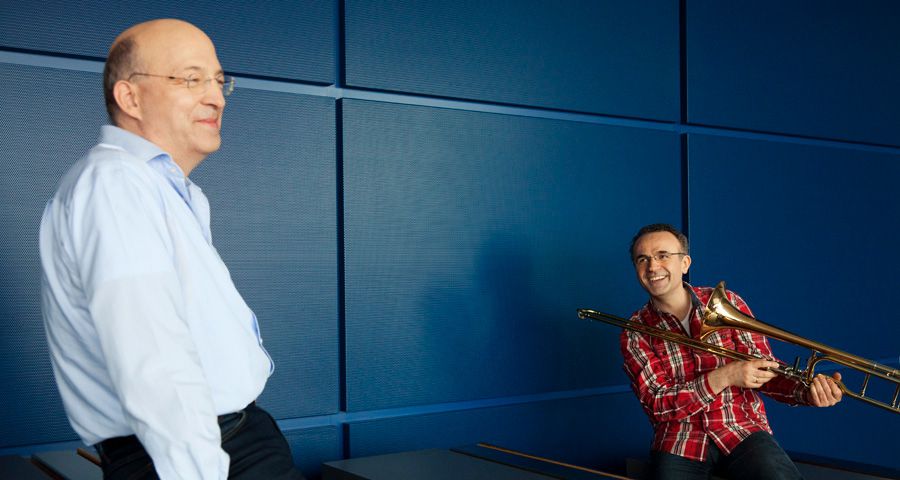 Hartmut Heinbach [left] and André Dornseiff [right] can imagine the next product revolution. "There is never a shortage of ideas", says Hartmut Heinbach, "I currently have five to ten topics which I would need to look into in more detail."

The system was also actually soon successful on the market.

HH: Yes, we enjoyed commercial success from the outset. This resulted in a completely new business segment for Gira, and nevertheless in 2003, when the devices were ready for shipping, sales figures were already high.

In general, if you compare the work situation back then with today, has much changed?

AD: No, not in principle, although the division of work is more advanced even in our area. Previously, fewer employees were responsible for a lot. Of course this is no longer possible, as the company is also growing.

FS: Like other companies, we must of course strike a balance between increasing efficiency and creativity, which also requires freedom and relaxed working. Pressure has also increased for us, but generally speaking, I would say that we are still doing a good job. And when a good idea comes out of technology, we will even get our product manager enthusiastic about it sooner or later.

So one of you could also come along with a new idea and say: Can I try this out?

AD: Yes, we are allowed to use 10% of our time trying out new ideas.

HH: That is very unusual. On paper it says that we are allowed to do this. The freedom to think outside the box is expressly desired by management.

FS: Of course, in everyday practice it is sometimes difficult to actually find 10% time. Then it is up to the individual organisational unit to support their people.

AD: Other things have also evolved, for example a creative circle. On four afternoons a year, around 100 colleagues from Development and Product Management meet up to discuss innovations, development of ideas and new creativity techniques led by selected speakers.

The next revolution could then be launched very soon.

HH: There is never a shortage of ideas. I currently have five to ten topics which I would need to look into in more detail. It's also inherent in our job that constant technological change also constantly provides many new possible solutions.

AD: We also deal with these issues in our intra-group or intra-department projects which are only intended for future projects. For me, the next system could come.

During his time at Gira, he completed further training measures in the following fields:

Born
1964
At Gira since
2001
Studies
electrical engineering at the University of Siegen
Career at Gira
Hartmut Heinbach works at Gira as a programmer for embedded software/firmware in the electronics development group. Here he is responsible for the selection, switching integration and firmware development of or for embedded systems, in particular for components and devices of the Gira door communication system.

During his time at Gira, he completed further training measures in the following fields:

Gira uses cookies for websites in the gira.de domain. By using our website, you agree to the use of cookies. Our Data Protection Declaration contains more information about the cookies used by us or third parties and the ways in which you can deactivate cookies.