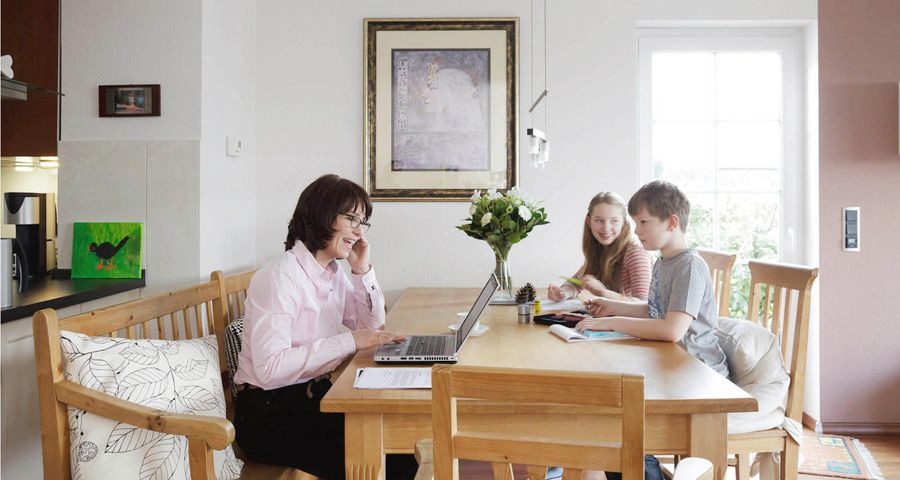 Juggling children and a career: Many women ask themselves how this can work. Christiane Fastenau is mother to a son and daughter aged nine and twelve. She has been head of Export Marketing on a part time basis for two years and has therefore committed herself to a job which entails frequent trips abroad. "A great deal is possible" she says, "if the whole package is right."

Ms Fastenau, together with a colleague you are in charge of 38 export countries in your area. You frequently travel around the world and have a challenging job although you have two children. Are you the "Ursula von der Leyen" of Gira?

CF: No, definitely not, that would be overstating it! Also, I only have two children, not seven.

Many woman are asking themselves how they can juggle having children and a job that is also fulfilling. How do you manage this?

CF: I would say, it is actually the whole package. Family is very important in our house. My husband supports me, he is self-employed and can arrange his time to fit in with my needs. I can also always fall back on my mother, parents in law and my sister, who is my children's childminder. On the other hand, I also have Gira, which gave me the opportunity to work part-time in this position.

Do you see this as an opportunity rather than a matter of course?

CF: Yes, I see it as an opportunity, for it must first be possible, in terms of organisation, to work 20, 25 or 30 hours and to work from home two days of the week. The important thing is that I can take part in as many work meetings as possible.

CF: I currently work 35 hours a week. I work a full day at the company on Monday and Wednesday, and half a day on Friday. I work from home on Tuesday and Thursday. This rhythm is geared to the children's timetables and can sometimes also change.

How do your customers cope with it?

CF: My customers have got used to it. They know how I work and also call me at home. In the meantime, I have become quite close to many of them. They know my children and, in return, I know when it's the birthday of my customer's dachshund or if someone is in hospital. We know how to work together and this makes things easier.

So everything usually runs smooth and harmoniously?

CF: Sometimes my head of department gulps when I have to leave in the middle of something. If it's just after four o'clock, for example, and I have to pick up my daughter from music school at half past four. That is a fixed time and I can't turn up an half an hour late. No-one has ever reproached me for it but of course this is sometimes still a challenge for my boss. On the other hand, I try to be 100% reliable, and make sure that I manage to deal with my workload and the results are right. It's always about give and take.

More on life and work at Gira 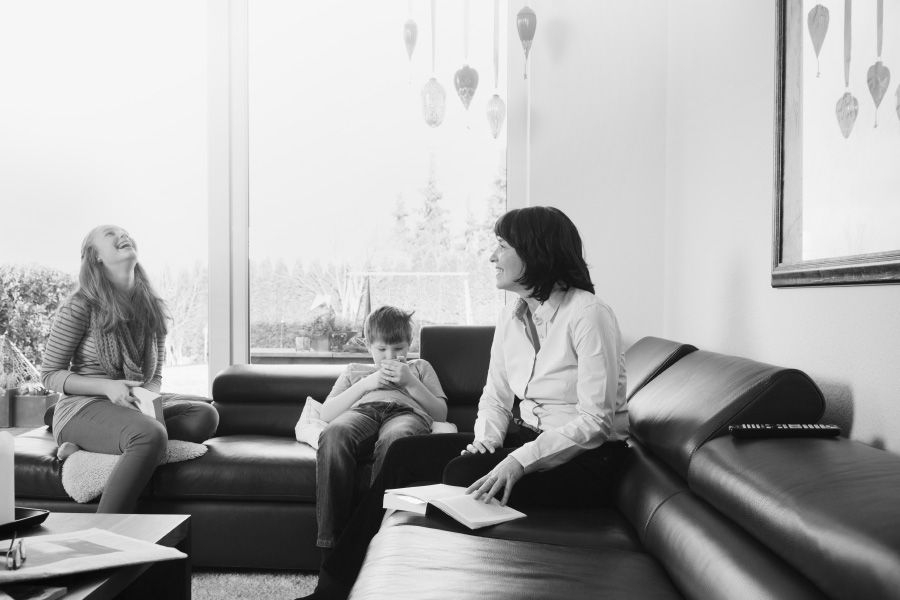 Christiane Fastenau with Katharina [12] and Laurenz [9] on the sofa at home. "After both pregnancies, I returned to work for 20 hours per week, which was then increased as the children grew older. Gira makes this possible, and this flexibility has always been one of the company's fundamental principles." 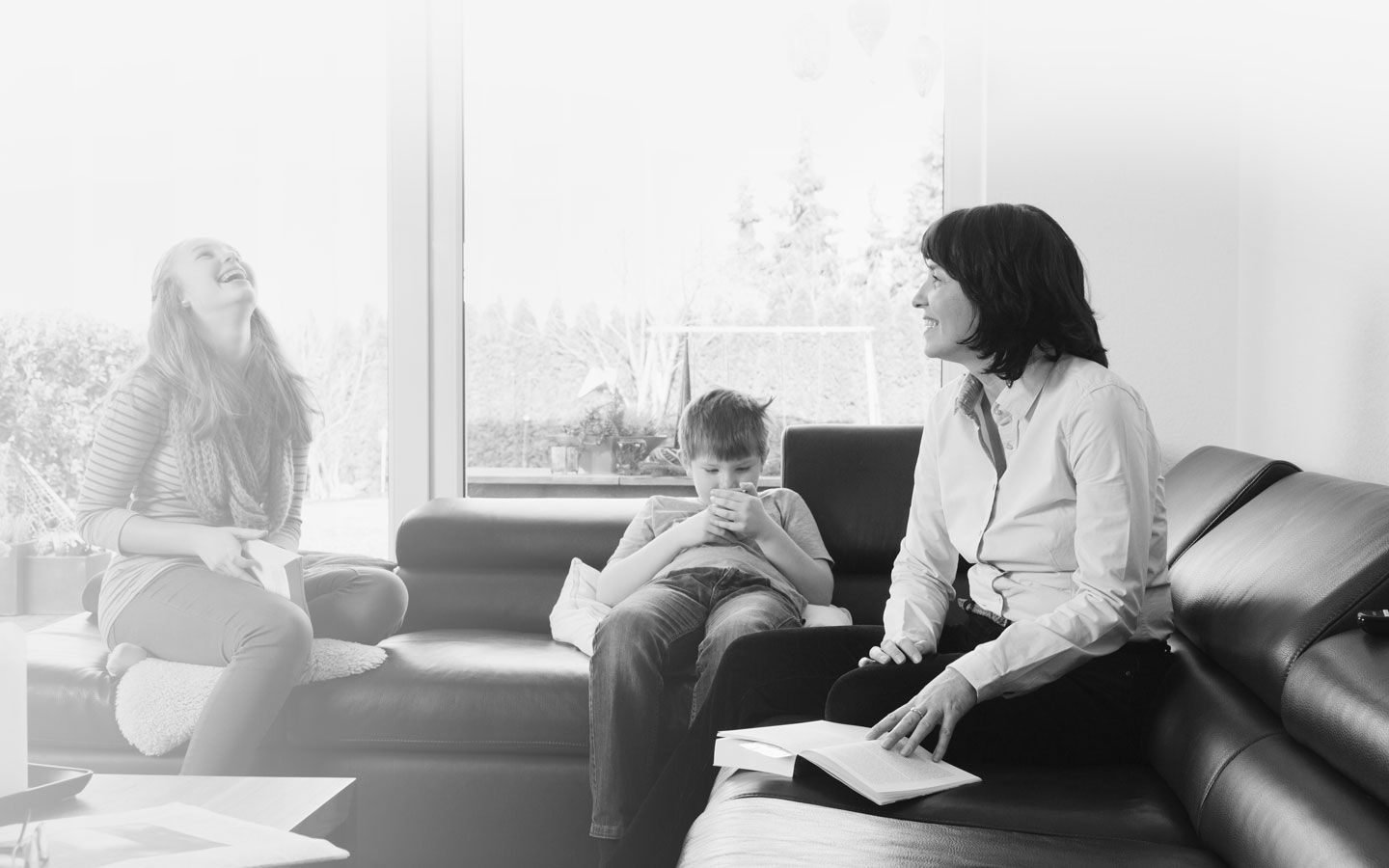 And is this a challenge for your colleague?

CF: My colleague Mr Keup has to accept that his supervisor is not there every day. But we talk on the phone every day and exchange views. Recently, we were joking about the subject: "On Tuesdays", he said "it's always relaxed here, because you're not around". I know that it is not relaxed for him. Of course, this was an adjustment for him.

Your children are now nine and twelve years old. This means that you've now been working like this for about eleven years?

CF: The attitude, this flexibility has always been one of the company's fundamental principles, this was a matter of course without management making a big issue of it. Twelve years ago I was also given the opportunity to take a year off, and then resume my previous role. I was already working from home back then. Today, we call this trust-based working hours and have stipulated this in the works agreement. I always had the opportunity to do this at Gira.

It wasn't normal in those days, was it?

CF: No. It was normal at that time for mothers to stay at home and look after the children. And there were also a few older colleagues who couldn't resist making comments about it.

And the women said nothing?

CF: No, they didn't as they all knew that they would be in the same situation sooner or later and would also have to make a decision. Men usually have the convenient version: The wife is at home and they are the breadwinner. That's easy.

How do you manage when you travel?

Do you still like travelling after all these years?

CF: Yes. Two weeks in China, who wouldn't enjoy that?

Whereabouts were you there?

CF: I have been to China four times. The last trip went from Beijing, Tianjin, Shanghai, Xiamen, Guangzhou, Chongqing to Xian …

CF: Yes. But no matter. You can't always communicate with each other on the phone. Sometimes in life you have to meet up in person. This has a lot to do with esteem and respect for the other person. I can't work in international marketing and then not travel. Travel is simply part of the job.

What are your specific tasks when you are on the move?

CF: I attend trade fairs, conduct planning discussions for marketing with the importer, sometimes I visit a construction site and talk to the architect. And then I would like to get a general impression of the countries and know: How is marketing carried out there? I walk down the streets, take photographs and look at which exhibitions, business and media are available and which co-operations are possible. You sometimes encounter things that are not usual in Europe.

Which things, for example?

CF: In China, for example, there are small screens that you can't turn off in the headrests of taxis and on trains, which play advertisements with audio. You simply have to watch it.

Do you speak 37 languages?

CF: No, only English. But this is also a vital skill. On Mondays, my colleagues from marketing and I have three hours of lessons together. Gira offers these English lessons to all employees working in international relations.

And this also works in China?

CF: Yes. Although this year I was surprised at how few Chinese really speak English. On my last trip I managed to fulfil a childhood dream there.

CF: I was on the Great Wall of China.

And how was it?

CF: Very sobering. The landscape was of course breathtaking. But it is very steep and the steps are so eroded that you have to be careful. On pictures the wall is always depicted as being empty. In reality, only part of it is open and it is so crowed that you have to push through the crowd.

Are you still satisfied in your job even after 20 years?

CF: I believe I have the best job of all. One minute I am dealing with Singapore and the next with the Netherlands or whatever country it happens to be. I have no routine at all. The day has finished before I have a chance to look at my watch.

Born
1965
At Gira since
1991
Studies
Studied Economics, specialising in marketing and graduated as an economist
Career at Gira
Christiane Fastenau started at Gira in Marketing for the topic country marketing. She has been head of the Export Marketing division since 2010. During her time at Gira she completed further training measures in the areas: